Next week, 13th August, 2015,  a birthday party is celebrated in a bizarre laboratory-like forest at SMEAR II station, in the University of Helsinki Hyytiälä Forestry Station. SMEAR II (Station for Measuring Ecosystem-Atmosphere Relations) is lead by Professor Markku Kulmala and is an international meeting point for research for atmospheric sciences, now already for 20 years.

in 2012, Ulla Taipale was invited by University of Helsinki (Division of Atmospheric Sciences) , research coordinator Eija Juurola to take part to the Climate Whirl project, to develop and coordinate the artistic contents of the initiative.

Climate Whirl is a dialogue between science, art and education. It aims at introducing
a holistic view on climate and ecosystem research and to increase public awareness on the interactions between climate and forests, as well as on the role of boreal forests in climate change. The project combines scientific and artistic research and introduces the results of this trans-disciplinary approach by organizing workshops, seminars and exhibitions.

Currently, Climate Whirl is a collaborative project by Department of Forest Sciences and Department of Physics (University of Helsinki), and Capsula.

The first artist-in-residence was organized in 2013, after a call for shortlisted artists. German artist Agnes Meyer-Brandis, was invited to be the first Climate Whirl artist to work in the station.  She started her residency in the woods in August 2013. During the first stage of the residency she was concentrated in collecting information, getting familiar with the research areas and interviewing station staff and visiting scientists, and in 2014 she returned for an intensive production period with clear ideas for her artwork.

In the end of the residency a 3-day Tealeametree workshop  was celebrated with international group of participants from arts and sciences. 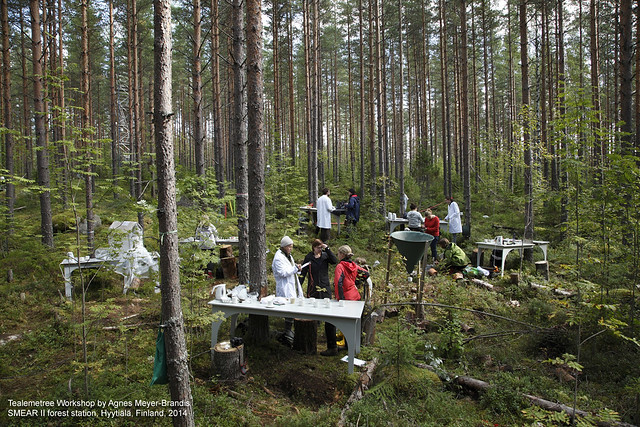 The artwork Teacup Tool,  (the video above) resulting of the Agnes residency at the station, was awarded in Ars Electronica Prixars competition, in the category of Hybrid Art, where a total of 2,889 entries from 75 countries were submitted.

A central artifact in the series of works created by Agnes, is a Tealemetree Station, a table in the SMEAR II forest, merged with a pine tree, that invites to Have a Tea with a Tree. An important research method of the artist was to invite other people working in the station to spend time in the forest, and share a table with her, and with a tree to converse, and enjoy some warm tea and cookies.

In the framework of the 20 years celebration of the SMEAR II station, a public Tealemetree Station artwork is installed permanently beside a 50 and something-year old pine tree, among other research instruments and tools located in the forest. It is meant to stay for the next decades to remind people of the importance of the communication, whether it is in between humans or, in between various species.

The Climate Whirl artist-in-residence and the permanent Tealemetree Station are supported by Kone Foundation and the Research Raft – Insitute for Art and Subjective Science. Special thanks for Kat Clear for the assistance during the second residency period.

« The 2nd Climate Whirl Workshop Call for participants is open!
A Tea Ceremony deep in the shade of SMEAR Forest »
Loading Comments...
%d bloggers like this: